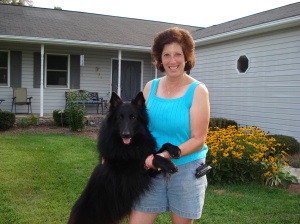 Jesse doing what he likes most.

My first Belgian Sheepdog, C’est Si Bon Jontue Astuce CDX, was purchased from Gloria Davis Bray in 1976.  This was the beginning of my love and devotion for the Belgian Sheepdog.  I have owned several Belgians throughout the years that have been my loving companions first and foremost, and then my team-mate in conformation and performance events.

In 1990, I reserved a bitch puppy, soon to be Ch Chancery’s Her Alibi CD, from Cheryl Corson of Chancery Belgians.   She was the start of my breeding program. Her Multi-Group Placing and Best In Show daughter, Ch Belroyale Cara O’Morningstar HS,  “Cara”, owned by Julie Fiechter has been a foundation for many nice champions to come.

Many champions later, I acquired “Lisa” who became CH MACH Isengard’s Mirage of Belroyale from Lorra Miller of Isengard Kennels.   Lisa has lovely breed type and a great working temperament.  Lisa finished her conformation championship out of the puppy classes quickly and has been competing in agility.  In January 2010, Lisa received her MACH agility championship.
During this time, I have remarried a wonderful man who is supportive of all of my doggy activities.   Lisa was bred to CH Signature’s Element and produced nine wonderful puppies.  I had only planned to keep one pup, but at the time the puppies were born, I lost my “Casey”, CH Chancery’s Keeping The Rhythm CD AX AXJ and “Brady” Belroyale’s Touch of Class MX AXJ within three week’s time.   My world had changed.   Our Belgian family went from three dogs, to Lisa and her nine puppies.   At the time, I made the crazy decision to keep two puppies, but in hindsight, it has been a tremendous experience.

Jordan had a litter with Jax (Dana/Dumbarton) in November 2010 and I kept a female puppy.   Her name is “Ziva”, CH Belroyale’s Brilliance N Black,.   She is now a year old and finished her championship in March 2012.   Ziva began her conformation career with a 3 point major and Best of Winners.  The next weekend, she got a Puppy Group 2.   We have begun our tracking, obedience, and agility training.  She is doing quite well and exudes endless energy.

I am trying to incorporate the beautiful Belgian type with sound structure and working ability.  Since my dogs play a huge role in my life, and I enjoy showing and training, I am trying to consistently produce “The Belgian That Can Do It All”.   I hear repeatedly from dog show acquaintances that my dogs are so friendly, beautiful, and have great focus.